Marvin and the experts at Fine Homebuilding magazine team up to share a few smart window selection tips that can deliver long-term value.

Low-cost windows can be pricier than they first appear. Like any weak link in the building envelope, poor-performing windows require a larger HVAC system and ducting, which is pricier up front and also more costly in the long run. “With insulating values as low as U-0.18, windows can have a huge impact on a home’s energy-efficiency rating and a cascade effect on the cost of the overall project,” said Brett Dillon, a longtime builder and developer in Texas, who chairs the technical standards committee for ResNet, a nonprofit that trains and rates residential energy auditors.

The math is easy, but not all builders and homeowners respond to it. “A lot of people don’t know how much they pay for energy and don’t really care,” Dillon says. “But everyone cares about comfort.” By the time a new homeowner complains about drafty windows, or condensation, or rooms that overheat in summer, it’s too late to rip out underperforming windows. Often the builder’s or homeowner’s solution is to upgrade the entire heating and cooling system. Interestingly, complaints about draftiness can usually be traced to low-quality windows with cold glass, not air leakage, says Steve Baczek, an architect outside Boston. “People say, ‘This window feels drafty,’ but it’s really not a draft. The radiation rate of the window is too high and you feel the cold,” he says. “It’s the same reason that basements feel cool. Your body is losing heat at a much higher rate as it tries to warm the cold walls.”

Windows are available in a wide array of types, styles, and packages. To get the most energy efficiency and durability for your dollar, you have to break down the window into its parts. The first consideration is the type of window itself— in other words, how it functions. Dig through any manufacturer’s website and you’ll find double-hung, casement, sliding, tilt-and-turn, and so on. Mostly these are aesthetic choices based on the style of the home and outside the scope of this article, but there are two types of air seals around the window that you should know about. 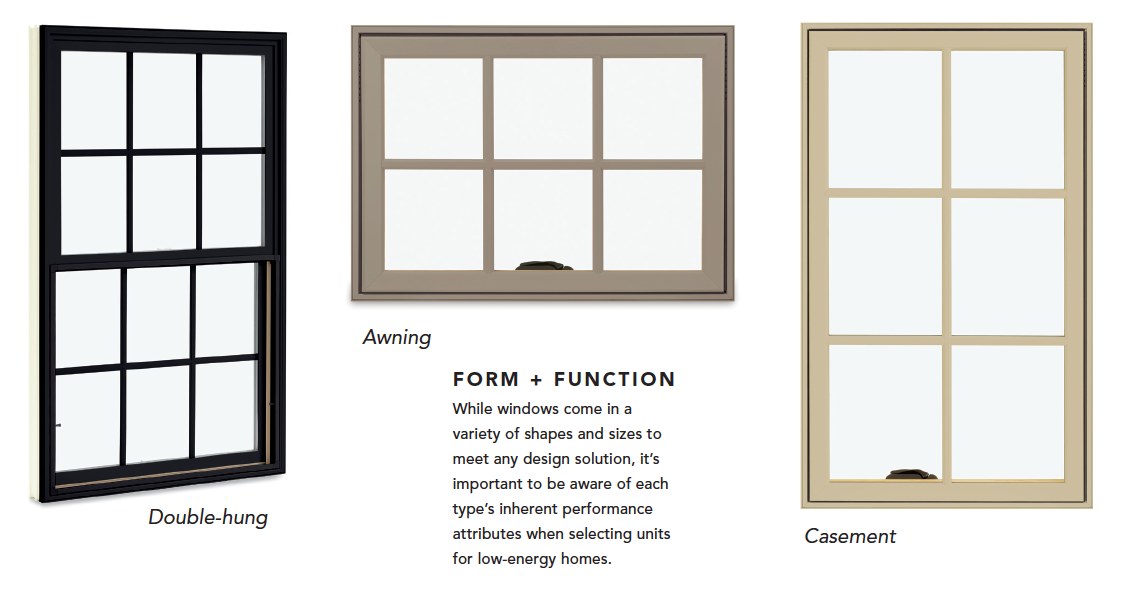 Casements, awnings, and tilt-and-turns all swing outward or inward, and when locked, they are pushed or pulled tightly against their weatherstripping. From an energy-efficiency standpoint, their compression seals give those windows a distinct advantage over windows that slide, either sideways or vertically (such as single- and double-hungs). So if you’ve been dead set on double-hungs, you might want to consider adding some windows that swing instead of slide. You’ll get better insulation, with all other things being equal.

Texas builder Matt Risinger agrees: “Get as many awning or casement windows as you can. They seal better, and their screens are on the inside, so they stay cleaner and are easier to take off in winter.”

After basic functionality, the choice of frame material has the greatest impact on price and performance. Frame materials are generally the weak link in a window’s thermal performance, and at 15% to 20% of the overall surface, the frame has a big impact on U-Factor. But there is also durability and weatherability to consider. The longevity of window frames, claddings, and finishes varies widely. Selecting the appropriate windows based on the environment is critical, especially in regions with extreme weather.

For example – fiberglass windows, whether they’re made completely of fiberglass or clad, have superior weatherization and insulation properties when compared to alternative materials. This makes them ideally suited for homes built in harsh locations and in homes that are taking energy efficiency seriously.  With its very low conductivity, fiberglass is also the best insulator among window-frame materials. And it shrinks and expands at the same rate as glass, making its air-seals as durable as the rest of the unit. Its longterm stability also ensures that fiberglass windows will operate like new for decades to come.

Energy Star recommendations are given for four climate zones in the United States: the mostly heating zone (Northern); two combination heating and cooling zones (North/Central and South/Central); and a mostly cooling zone (Southern). Every qualified window will list the zones it is certified for. The Energy Star standard is a good benchmark for energy-conscious architects and builders, but every house is unique. To choose the best-performing windows, it’s still recommended to work with a supplier to take into account factors such as site orientation and the size and number of windows.

The glass, called glazing, is the other critical component in your window package. While manufacturers tend to pick a frame material and stick with it, they offer a wide range of glass configurations and coatings, all of which have a big impact on energy efficiency. In fact, the top U.S. window manufacturers get their glass from just a few factories, who specialize in combining the high-tech coatings, films, spacers, and gases that go into today’s glazing units.

Two-pane insulated units are now standard, and that step alone has greatly reduced the U-Factor, or the amount of heat a window lets through. Adding inexpensive low-e coatings and argon gas between the panes can take a two-pane window up to a U-Factor of 0.3, which will meet the Energy Star standards for all regions.

The next big step up is adding a third pane, which can lower the window’s overall U-Factor by another 50 percent. Some designers and builders of low-energy homes have relied on European triple-pane windows as part of a superinsulated building envelope. However, these window packages are traditionally cost-prohibitive for many clients. Double-pane windows and domestic triple-pane units can offer performance at less expense. Still, experts advise finding more cost-effective ways to improve a building’s thermal envelope before going to three-pane units.

“As we start building more airtight and insulated homes, triple-glazed will start to make more sense,” Risinger predicts. “Here, we aren’t quite there yet.”

Tip 6: There is no Label for “Durability”

The National Fenestration Ratings Council provides a label on every window that gives reliable numbers for its energy-efficiency. But performance, comfort, and overall value aren’t just about initial energy-efficiency. If windows aren’t strong and durable, that performance won’t last. Windows can even become a nuisance. “There’s nothing worse than busting your butt all day at work and then coming home to find sticking windows, rotting siding, and more stuff to fix,” Dillon says. “It’s a big reason why more people are renting.” Choosing windows that will save energy, stand up to the weather, and perform like new for decades might seem like a lofty goal, but today’s technologies put it well within reach.